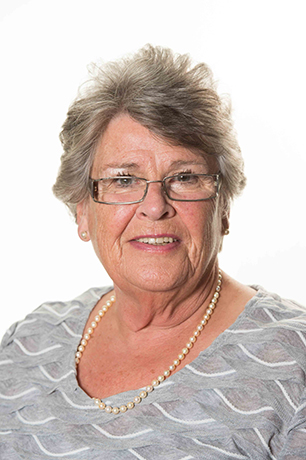 Jeannie Young’s connection with St Richard’s goes right back to its inception. Jeannie was at the very first meeting at St Andrew’s Church in Droitwich. She says that that the idea of finding a better way to look after dying people and their families left her feeling truly energised. Jeannie had herself trained as a nurse and later a midwife at hospitals in Birmingham and Worcester. She married a farmer, Rob Young, and they were both involved in getting in St Richard’s in its early days. Jeannie ended up being a governor for 24 years including 6 years as Chairman of the Governors, steering St Richard’s through many phases including the moves to Castle Street and Rose Hill, the setting up of the Education Unit, the creation of the first hospice shop, and finally the Capital Appeal for and the building of bedded unit in Wildwood Drive. In designing the new building, Jeannie and Care Director Rachel Bucknall toured the country visiting countless hospices and seeing what worked and what didn’t. Jeannie retired in 2007 just after the new hospice opened.